Seeed has announced a modular human-machine interface (HMI) device based on the Raspberry Pi Compute Module 4. The ReTerminal, which will go on pre-order later this month starting at $195, features a 5-inch touchscreen. 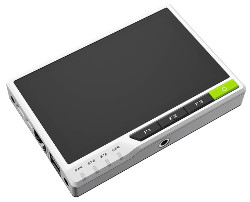 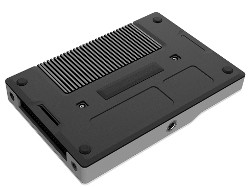 ReTerminal render images, front and back
(click images to enlarge)
Despite the compact, 140 x 95 x 21mm footprint and mobile-like features such as an accelerometer, there is no mention of battery support. The device powers up on [email protected] DC power via a USB Type-C port.

Like most Raspberry Pi CM4-based systems and carrier boards, the ReTerminal provides a 40-pin GPIO connector for Raspberry Pi HAT expansion. Like many, it exploits the module’s PCIe Gen2 x1 interface for expansion. 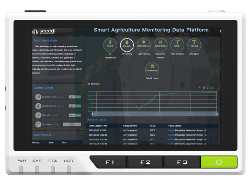 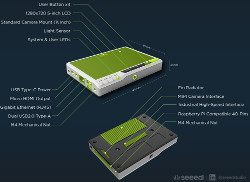 ReTerminal GUI display (left) and detail views
(click images to enlarge)
There is no mention of M.2 or mini-PCIe, but only an external, rear-mounted “vertical high-speed expansion interface” with PCIe x1, USB 2.0 host, 26x GPIOs, and a PoE interface. Optional modules include mic array/speaker, LoRaWAN, 5G/4G, ZigBee, Sub-1GHz, PoE, and an Ethernet switch.

ReTerminal modules
(click image to enlarge)
This description, along with the image above, the M4 mounting nuts, and a note that “all components and ports on the device are surface-mounted on two sides,” suggests that Seeed is launching a product line of custom expansion modules in plastic housing. These plug-ins will be supported by an “active community.”

The 40-pin connector supports standard Raspberry Pi HATs. However, the image above appears to show an enclosed I/O module plugging into the 40-pin, suggesting that Seeed may also supply a line of 40-pin HATs in custom modules. Seeed offers a lot of HATs and other Pi add-ons, including its recent, LoRaWAN-equipped WM1302 Raspberry Pi HAT.

ReTerminal side views
(click images to enlarge)
The ReTerminal runs Debian Linux on the Raspberry CM4, which offers the same 1.5GHz, quad-core Cortex-A72 Broadcom BCM2711 found on the RPi 4. It uses a model with 4GB LPDDR4 and 32GB eMMC. Therre was no mention of an 8GB option. The device provides 802.11-ac with Bluetooth 5.0 BLE, which is probably delivered via the CM4.

The system is equipped with a GbE port, 2x USB 2.0 host ports, and a single micro-HDMI port with [email protected] support. There is a 2-lane MIPI-CSI interface that supports an optional camera via a quarter-inch camera mount.

The ReTerminal provides several extras including a digital light sensor, an accelerometer, and an RTC. You also get a power button, 3x user keys, and 4x LEDs. There also appears to be a speaker and some antenna mounts.

The ReTerminal will go on pre-order later this month for $195. No ship date was listed. You can sign up for notification and a $5 early bird coupon here. More information may be found in Seeed’s announcement and product/shopping page.