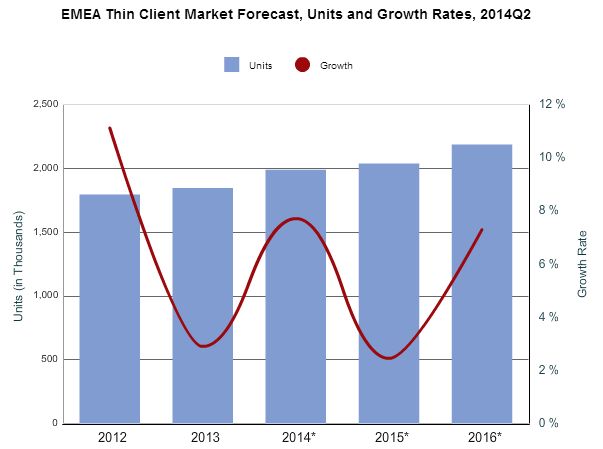 The Europe, Middle East, and Africa (EMEA) thin-client market posted double-digit growth in Q2 2014 for the second quarter in a row

Thin-client shipments in EMEA increased by 15.3% year on year in Q2 2014, which corresponded to about 476,500 units. Shipment value also went up, by 22.2% year on year, to reach $169.65 million. Value has been growing faster than volume for the past six consecutive quarters, reflecting both stronger demand for more powerful hardware and an increasing demand for all-in-one (AIO) thin clients. The latter accounted for 4.5% volume share of total thin-client shipments in the region.

“It is worth noting that the influence of the migration from expired Windows XP, as a market driver for PC and thin-client renewals, will weaken by the end of 2014. As a result, thin-client growth will ease off as well,” says Oleg Sidorkin, senior research analyst at IDC. “In H1 2015, EMEA thin-client shipments could post a marginal decline, unless economic growth across Europe stabilizes sufficiently to become a strong market driver.”